in Africa, African History
Reading Time: 15 mins read
A A

Dakar (English: /dɑːˈkɑːr/; French: [dakaʁ]; Wolof: Ndakaaru) is the capital and largest city of Senegal. The city of Dakar proper has a population of 1,030,594, whereas the population of the Dakar metropolitan area is estimated at 3.94 million in 2021.

The area around Dakar was settled in the 15th century. The Portuguese established a presence on the island of Gorée off the coast of Cap-Vert and used it as a base for the Atlantic slave trade. France took over the island in 1677. Following the abolition of the slave trade and French annexation of the mainland area in the 19th century, Dakar grew into a major regional port and a major city of the French colonial empire. In 1902, Dakar replaced Saint-Louis as the capital of French West Africa. From 1959 to 1960, Dakar was the capital of the short-lived Mali Federation. In 1960, it became the capital of the independent Republic of Senegal.

Dakar was the political center of French West Africa and is the capital of modern Senegal. Located on Cape Verde, the westernmost point of the African mainland, Ndaxaru, known by its French name, Dakar, has been occupied at least since Europeans began to explore the area. The French, attracted by the settlement’s location on a natural harbor and its proximity to the island of Gorée, a French possession and center of the Atlantic slave trade, annexed the village in 1857. The French port was constructed six years later in 1863.

In 1862, the Commandant of Gorée, while planning the future development of the city, envisioned Dakar as becoming the capital of a vast colonial empire in Africa. In 1902, Dakar indeed became the seat of the Government-General of French West Africa. While the colonial planners intended the city to be segregated, that racial division was never explicitly legislated. As a result racial segregation in Dakar was never absolute. Despite this, European settlement was concentrated on a plateau. Additionally, an outbreak of the plague in 1914 sparked a panic which led to many natives being driven off the plateau and to new village named Medina. This village was itself soon absorbed into growing Dakar. Issues of discrimination persisted after independence in 1960 as poor neighborhoods were often cleared, under the pretence of health or aesthetics, to make room for new developments. Consequently new slums continually spring up on the city’s periphery.

In the 20th century, Dakar became a hub for sea and, later, air traffic between Africa, Europe, and the Americas. During the Second World War, Dakar gained notoriety in the United States due to its proximity to the Western Hemisphere and the ruling Vichy French’s alliance with Nazi Germany. On 23 September 1940, a British fleet, accompanied by Free French forces, attacked the city in an attempt to take it from the Vichy government.  The Battle of Dakar ended two days later when the Allies withdrew.

In 1960, the newly independent colonies of Senegal and Mali banded together in the Mali Federation with Dakar as their capital. The new nation lasted less than a year and by the end of 1960, Dakar was the capital of the Republic of Senegal. While modern Dakar continued to be a financial center of Western Africa, it lost some of economic prominence in the latter half of the twentieth century. In response to this, Dakar, a city of 2.5 million, has capitalized on its pleasant climate to successfully encourage the growth of the tourism industry.

The city of Dakar is a member of the Organization of World Heritage Cities, and contains several landmarks. One of the most notable is Deux Mamelles, twin hills located in Ouakam commune. The hills are the only high ground in the city, providing views of the entire area and sweeping views of the city. The first hill is topped with Mamelles Lighthouse built in 1864. The second hill has the newly completed African Renaissance Monument built on top, which is considered the tallest statue in Africa.

Other landmarks of the city include the medina quarter located in Médina commune. Médina is originally built as a township for local populace during the French colonial-era. Today it is a traditional commercial center packed with tailors’ shops. The most notable street market is Soumbédioune, which is also a major tourist attraction. The quarter also houses Dakar Grand Mosque at the heart of the commune, which is built in 1964 and one of the prominent landmarks of the city.

Dakar is flanked by two small islands, Île de N’Gor and Île de Gorée. The former is on the northern shore of N’Gor commune with beaches providing attractions such as surfing. N’Gor commune also has other popular beach resorts such as Plage de N’Gor. Île de Gorée, formerly a slave island, is today a UNESCO World Heritage Site which preserves the colonial era architectures and facilities. The notable places on the island is Gorée Memorial which is a memorial for the slaves, and the House of Slaves which is a museum dedicated to the Atlantic slave trade. Today, the island is also hosting the art scene of the hundreds of local artists who line up their works at the outdoor exhibitions.

Some other notable places include Layen Mausoleum which entombs the founder of the Layene Sufi tariqa, Palais Présidentiel which is the seat of the government constructed in 1907, Place de l’Indépendance which is the central square of Dakar, Dakar Cathedral, and Cheikh Anta Diop University also known as the University of Dakar, which was established in 1957.

Sports club AS Douanes are based in Sicap-Liberté; they play in the Senegal Premier League and previously won the 2014–15 Ligue 1 (Senegal) season.

Dakar used to be the finishing point of the Dakar Rally until 2007, before the event was moved to South America for the security concerns in Mauritania.

Dakar was set to host the 2022 edition of the Youth Summer Olympics, however, the games have been postponed to 2026, it will be the first of its kind Olympics ever held in Africa.

The town is home to the Autonomous Port of Dakar and the terminus of the non-functioning Dakar-Niger railroad line.

The Train Express Regional (TER) will connect Dakar with Blaise Diagne International Airport (AIBD). An initial 36 km will link Dakar to Diamniadio and a second phase of 19 km would connect Dakar to the Blaise Diagne airport. A total of 14 train stations will be served and the fastest end-to-end journey will take 45 minutes. The railway is expected to carry 115 000 passengers per day. The TER’s first test run has been launched on 14 January 2019 and the first passenger train is scheduled to run later this year

Among the places of worship, there are predominantly Muslim mosques. There are also Christian churches and temples : Roman Catholic Archdiocese of Dakar (Catholic Church), Assemblies of God, Universal Church of the Kingdom of God.

Dakar was selected as the Capital of Islamic Culture for African Region for the year 2007 by the Islamic Educational, Scientific and Cultural Organization (ISESCO), honoring its Islamic heritage. ISESCO and its parent organization Organization of Islamic Cooperation (OIC) have held several regional and international conferences in the city, best known for adoption of Dakar Declaration in 1991 which aimed at fostering the cooperation between the member states. Dakar is also known as the birthplace of the Layene Brotherhood, a Sufi tariqa founded by Seydina Mouhammadou Limamou Laye in 1883 at the commune of Yoff. Seydina is buried in the Layen Mausoleum which is among the major landmarks of Dakar. Today, Layene Brotherhood is consisted mostly of the Lebou people, and based in the Cap-Vert area. It is also the third biggest Sufi order in Senegal.

Prominent worshiping sites for Muslims in Dakar include the Grand Mosque of Dakar, built in 1964, which is situated at Allée Pape Gueye Fall of Medina, the Mosque of the Divinity, constructed in 1973, situated in Ouakam, with the characteristic triangular windows, and Omarienne Mosque with minarets topped by green orbs.

In Senegal the traditional culture is very centred around the idea of family. This even includes the way that they eat. When it is time to eat a typical meal someone will say “kay lekk” which means ‘come eat’. Everyone will come together and sit around the plate and eat with their hands.[32] Some famous dishes include Cebbu Jën (Tiéboudienne) and Yassa. The etiquette of people in Dakar is very simple but very vital. To not greet someone upon sight is to portray rudeness and oftentimes ignorance. Due to French colonialism the children of Dakar have a unique school system. The school will get a break at about midday and return home to get some rest. Since the population is majority Muslim there are daily activities such as going to the mosque at noon prayer and attending the mosque on Fridays. Music has a big influence on the youth with famous artists like Daara J Family who use their voice to represent the problems in their communities. 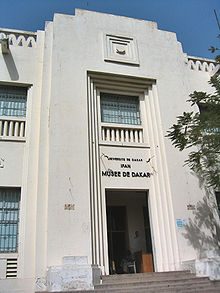