Top Places to Visit In Lesotho On Your Next Vacation

in Africa
Reading Time: 15 mins read
A A

Southern Africa
Lesotho is a mountainous, landlocked country located in Southern Africa. It is an enclave, surrounded by South Africa. The total length of the country’s borders is 909 kilometres (565 mi). Lesotho covers an area of around 30,355 square kilometres (11,720 sq mi), of which a negligible percentage is covered with water. Top Places to Visit In Lesotho On Your Next Vacation

Lesotho is located in southern Africa. Lesotho an enclave in South Africa, so it is bordered by South Africa to the north, south, east, and west.

Lesotho’s food culture features likhobe (a stew with beans, berries, and sorghum), meat, and vegetables. Corn-based dishes include papa and motoho (fermented sorghum porridge). Basotho cuisine includes sauces, generally less spicy than other African countries. Beetroot and carrot salads are common side dishes. Top Places to Visit In Lesotho On Your Next Vacation

Top Places to Visit In Lesotho On Your Next Vacation The Katse Dam, a concrete arch dam on the Malibamat’so River in Lesotho, is Africa’s second largest double-curvature arch dam. The dam is part of the Lesotho Highlands Water Project, which will eventually include five large dams in remote rural areas. The dam is just below the confluence of the Bokong River, which forms the western arm of the Katse reservoir. The potential of the project was identified by the South African civil engineer Ninham Shand as a possible means to supplement the water supply to South Africa. The World Bank arranged a treaty between the governments of South Africa and Lesotho, allowing the project to proceed

Maletsunyane Falls is a 192-metre-high waterfall in the Southern African country Lesotho. It is located near the town of Semonkong, which also is named after the falls. The waterfall is on the Maletsunyane River and it falls from a ledge of Triassic-Jurassic basalt. The plunging water creates a reverberating echo when it contact the basin of the falls, and local legend has it that the sound comes from the wailing of people who have drowned in the falls. In December 2017, the Australian YouTube channel How Ridiculous broke the record for the world’s highest basketball shot at Maletsunyane Falls. This stands as the current world record. The Maletsunyane Falls first Guinness Record was for the “World’s longest commercially operated abseil”, managed by Semonkong Lodge, with a height of 204 m.

Thabana Ntlenyana, which literally means “Beautiful little mountain” in Sesotho, is the highest point in Lesotho and the highest mountain in southern Africa. It is situated on the Mohlesi ridge of the Drakensberg/Maloti Mountains, north of Sani Pass. It stands at 3,482 metres high. The peak is usually climbed by groups completing a Grand Traverse of the Drakensberg, although the peak is technically in the Maloti Mountains. The peak is often also climbed from Sani Top Chalet or from Vergelegen Nature Reserve. 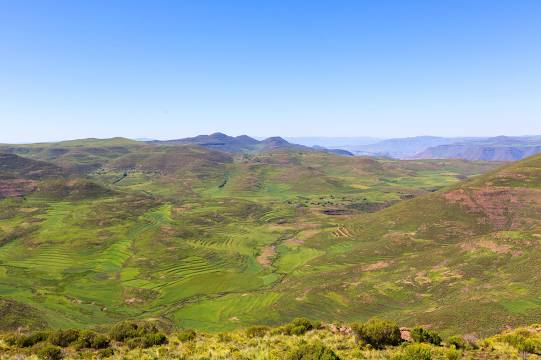 The Maloti Mountains are a mountain range of the highlands of the Kingdom of Lesotho. They extend for about 100 km into the Free State. The Maloti Range is part of the Drakensberg system that includes ranges across large areas of South Africa. “Maloti” is also the plural for Loti, the currency of the Kingdom of Lesotho. The range forms the northern portion of the boundary between the Butha-Buthe District in Lesotho and South Africa’s Free State

Thaba Bosiu is a sandstone plateau with an area of approximately 2 km² and a height of 1,804 meters above sea level. It is located between the Orange and Caledon Rivers in the Maseru District of Lesotho, 24 km east of the country’s capital Maseru. It was once the capital of Lesotho, having been King Moshoeshoe’s stronghold.

Morija Museum & Archives, also known as Morija Museum, is located in Morija, a large village in the Maseru district of Lesotho. The museum was formally opened in 1956, and entered its present permanent facilities in 1989. The purpose of the museum is to carry on the tradition of Morija, as a centre of learning, innovation and excellence, in Lesotho. Morija Museum is home to many cultural treasures including, traditional Basotho artifacts as well as Lifaqane and Boer War memorabilia. The archives portion of the museum includes documents dated as far back as 1826. This collection is extremely rich in 19th century documentation related to Lesotho. 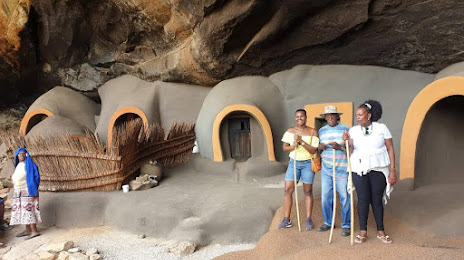 The Kome Caves are a group of cave dwellings made out of mud in the district of Berea, Lesotho 25 km east of Teyateyaneng.The caves are still inhabited by the descendants of the original people who built the caves. The site has been classified as a National Heritage Site. 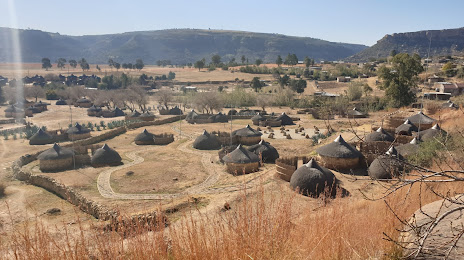 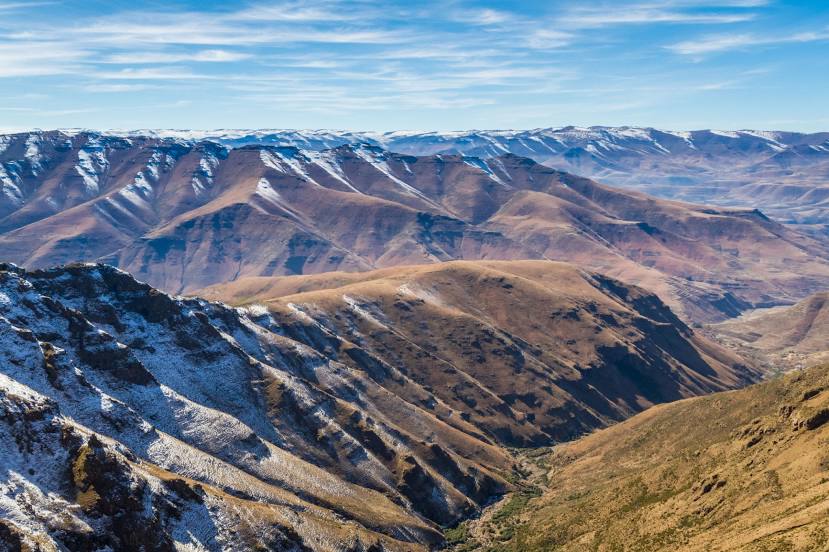 The Bokong Nature Reserve is a reserve located in Lesotho. It contains Afro-alpine wetlands at the sources of the Bokong and Lepaqoa rivers, plus montane grassland and patches of heathland boulder beds, both of which are regular haunts for Vaal rhebuck. The reserve’s highlight, however, is the Lepaqoa Waterfall, which freezes in winter to form a column of ice. The reserve’s entrance is next to the visitors’ centre, signposted left off the highway beyond the Mafika Lisiu Pass. Perched on the edge of a cliff overlooking the Lepaqoa Valley, the visitor centre has a picnic site and interpretative trail to the top of the Lepaqoa Falls, as well as guides and horses for hire. There is also a two- to three-day hike along the alpine plateau to Ts’ehlanyane National Park to the north. Camping is possible throughout the reserve, and there are also two stone-and-thatch rondavels close to the falls. Bokong is a picturesque hiker-friendly reserve at altitudes of 2800 to 3200 meters.

Katse Botanical Gardens is a centre for Alpine flora in Katse village, Lesotho. The gardens were created as a result of plant rescue missions to mitigate the impact of the Katse Dam, particularly spiral aloes. The collection has a focus on traditional Sotho medicinal plants and has a large seed bank. At an altitude of 2229 meters it claims to be the highest botanical garden in the southern hemisphere. 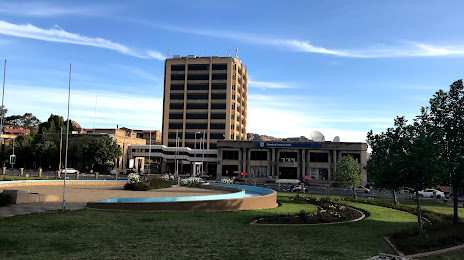 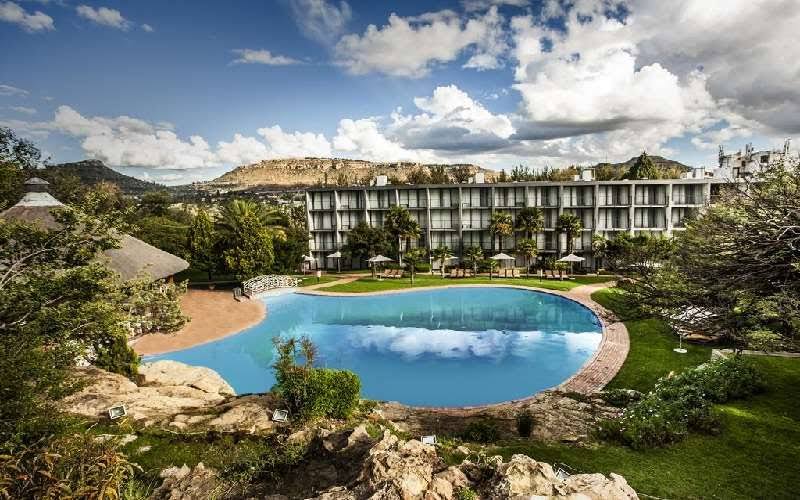 The Moteng pass is a steep tarred pass in the Maloti mountains of Lesotho, reaching a height of 2820 metres. It is one of two passes that links the town of Butha-Buthe with the diamond mining town of Mokhotlong, the other pass being the Mahlasela pass. Heavy snowfall frequently closes the pass in winter. The pass is 7.9 km long, with the last stage being extremely dangerous in winter due to patches of ice. 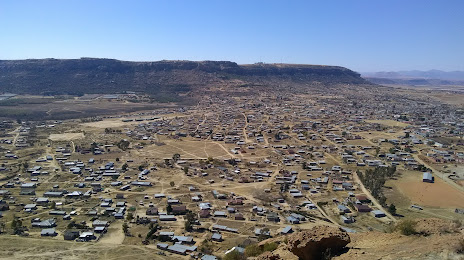 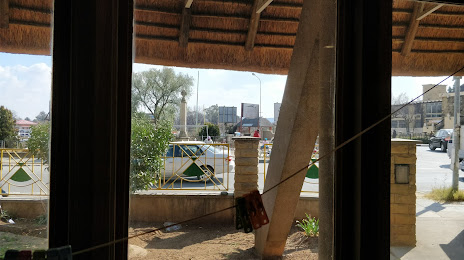 Our Lady of Victory Cathedral

The Our Lady of Victories Cathedral also known as the Cathedral of Maseru, is a Catholic Church located in the city of Maseru, Lesotho. The church is governed by the Roman or Latin rite and functions as the headquarters of the Metropolitan Archdiocese of Maseru which was raised to its current status in 1961 by the Bull “Etsi priors” of Pope John XXIII. It is under the pastoral responsibility of Archbishop Gerard Tlali Lerotholi and was visited by Pope John Paul II on his tour of several African countries in 1988. 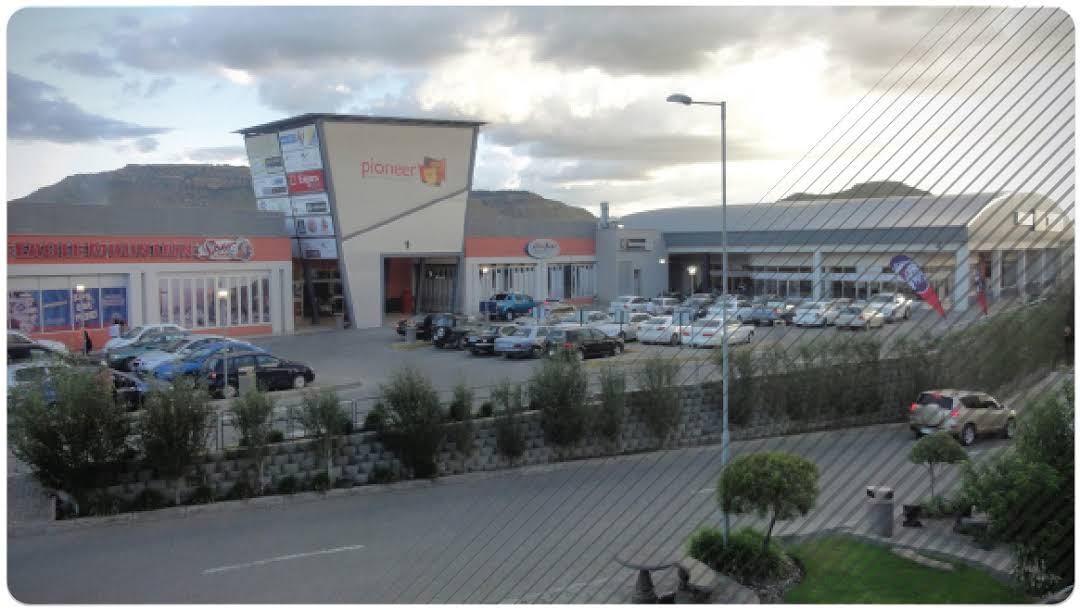 Thaba Putsoa is a mountain in the Maseru District of Lesotho. It lies along the road to the Mohale Dam, approximately 70 kilometres to the southeast of the capital Maseru. The mountain attains a height of 3,096 metres. Thaba Putsoa has some of the coolest temperatures in Lesotho. 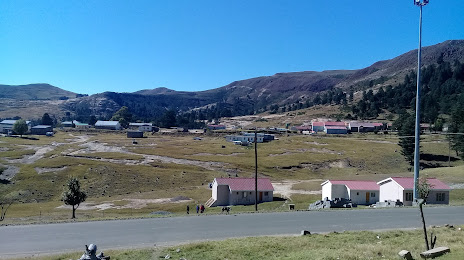 Popple Peak is a mountain in the Drakensberg range, South Africa. It is located on the border between South Africa and Lesotho, on the watershed that forms the border between the two countries. Popple peak is 3331 m above sea level and has an elevation of approximately 300 metres from the surrounding escarpment. It is the 13th highest peak in South Africa and it is visible from as far away as Estcourt and Ladysmith in the KwaZulu-Natal Midlands. This peak is considered a Khulu, a peak above 3000 metres and not within 1 km of another Khulu, as defined by the Mountain Club of South Africa. The peak was named by Barry Anderson in 1946 after John Poppleton. On arrival at the summit a thunderstorm came up, and Poppleton was concerned for his safety, causing him to leave the summit. Anderson later sent the survey of the peak to the Surveyor General with the height and name “Popple Peak” 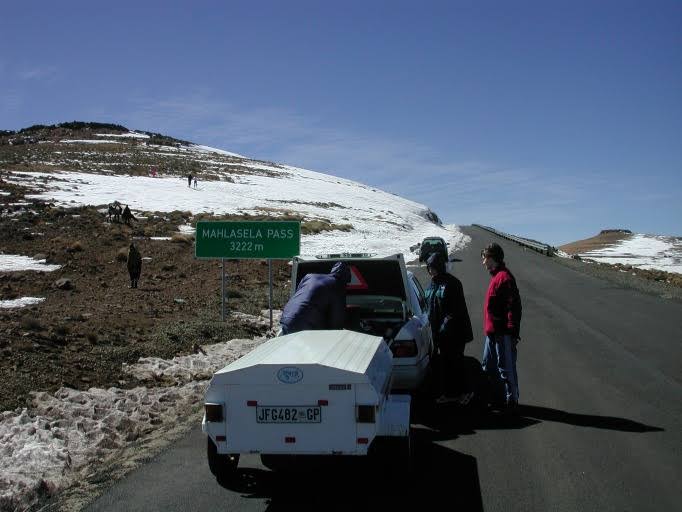 The Mahlasela pass is a tarred pass in the Maloti mountains of Lesotho, reaching a height of 3222 meters. It is one of two passes that links the town of Butha-Buthe with the diamond mining town of Mokhotlong, the other pass being the Moteng pass. Heavy snowfalls frequently closes the pass in winter. The only skiing resort in Lesotho, Afriski is situated here. It is considered to be the highest road pass in Southern Africa 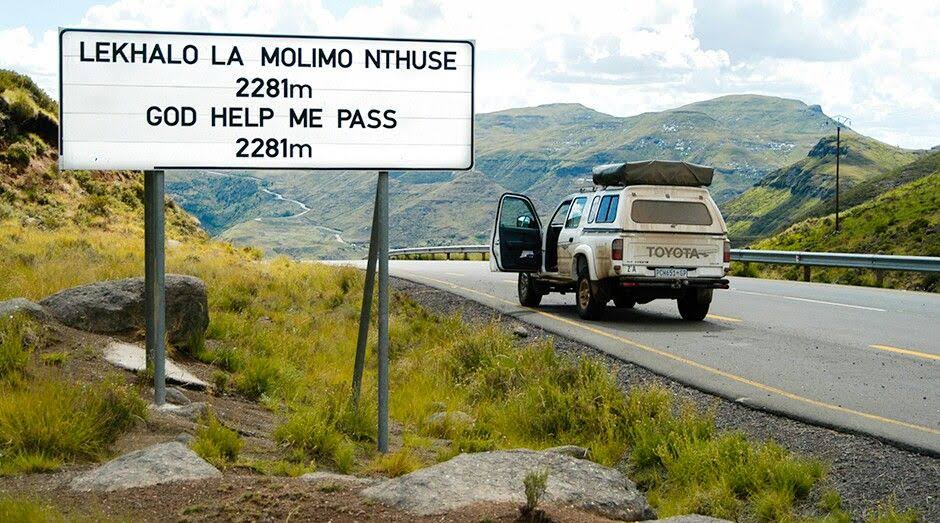 The God Help Me Pass, or Lekhalong-la-Molimo-Nthuse in seSotho, is a mountain pass in western Lesotho. It is the second mountain pass on the A3 road going into the central highlands. The road ascends steeply from the village of Setibing, and near the summit is the Basotho Pony Trekking Centre, which offers a variety of trekking expeditions. The Makhaleng River flows close by Setibing, and its valley forms the western approach to the pass. The higher Blue Mountain Pass, Lekhalong-la-Thaba-Putsoa, is a few kilometres further east, and the first mountain pass, Bushman’s Pass, Lekhalong-la-Baroa, is about 10 km to the west, rising from the village of Nazareth. God Help Me Pass 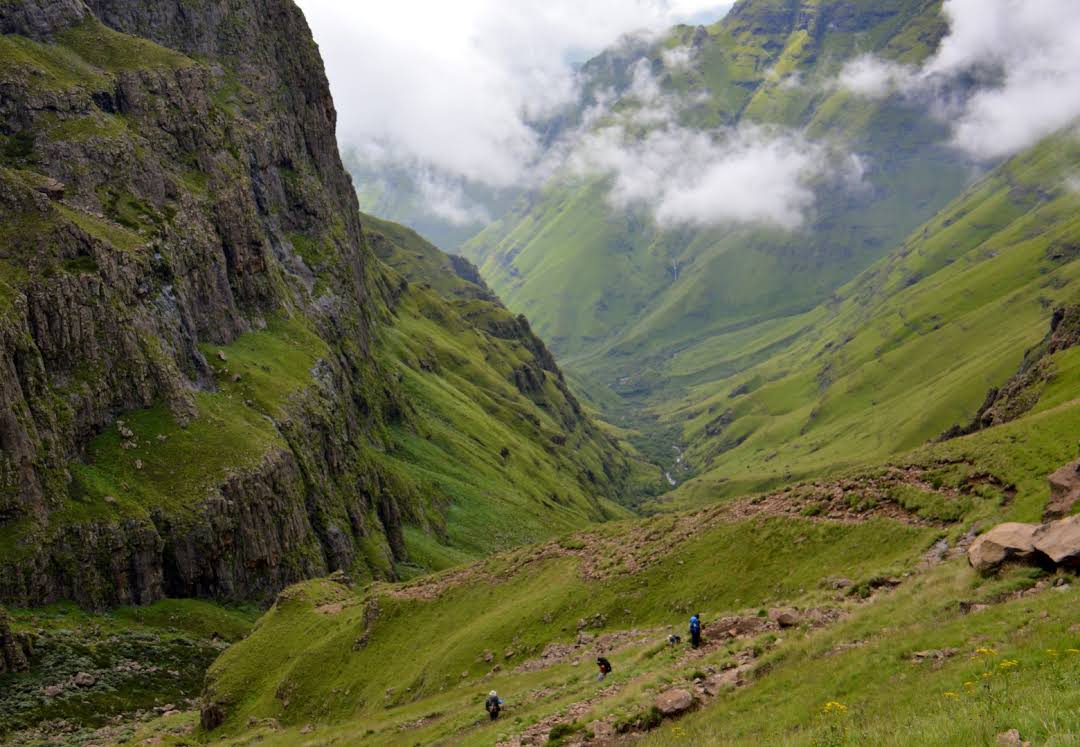 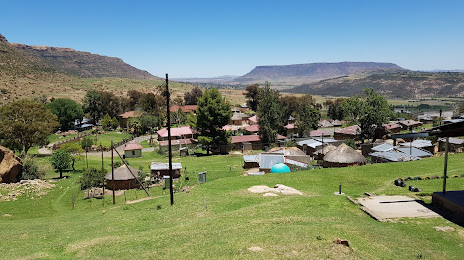 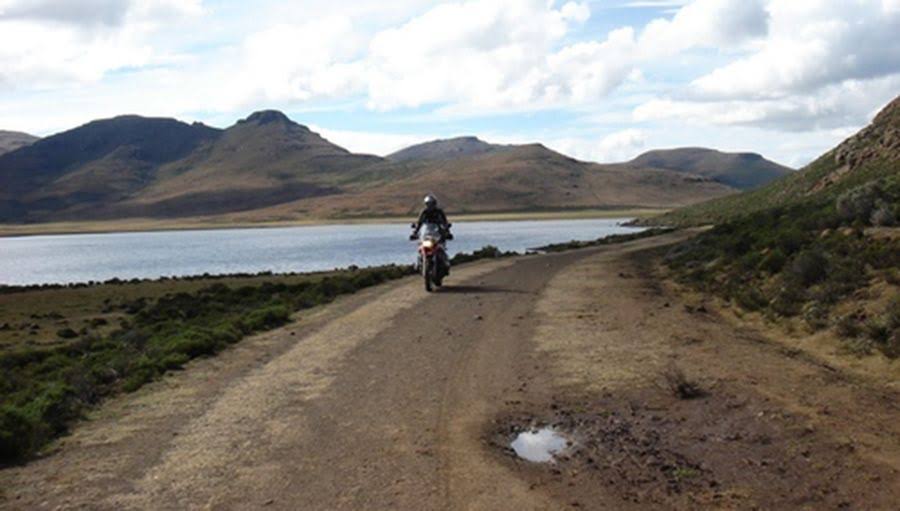 Scenic mountain with a variety of plants

Ntelle is a community council located in the Butha-Buthe District of Lesotho. Its population in 2006 was 5,233. 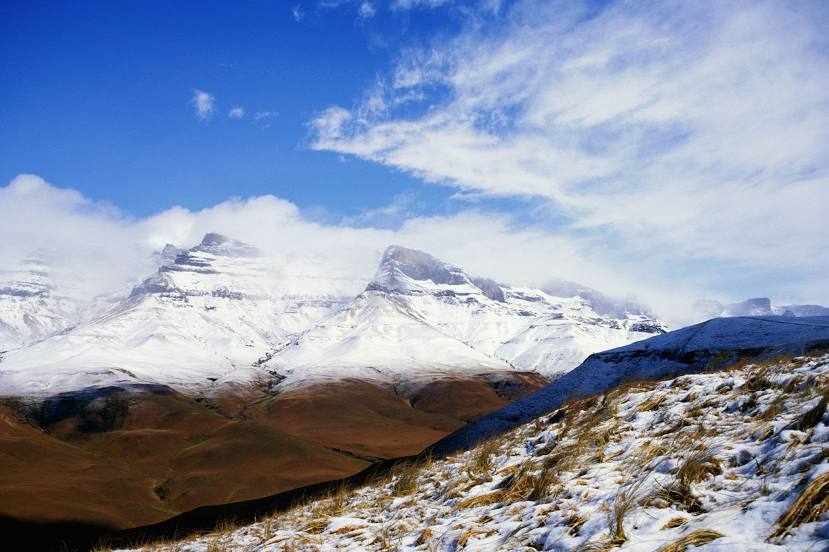 Njesuthi or Injesuthi Dome is one of the highest mountains in the Drakensberg mountain range at 3,408 metres. It is located on the border between Lesotho and the South African province KwaZulu-Natal. Also, less than 1.5km away on the border is the taller Mafadi peak at 3,450 metres.

Disclaimer: The images used in this article are property of their owners

Top Places to Visit In South Africa On Your Next Vacation

List of the Best Auto Parts & Service Companies in Qatar