in Tech Terms
Reading Time: 2 mins read
A A

An alarm clock (or sometimes just an alarm) is a clock that is designed to alert an individual or group of individuals at a specified time. The primary function of these clocks is to awaken people from their night’s sleep or short naps; they are sometimes used for other reminders as well. Most use sound; some use light or vibration. Some have sensors to identify when a person is in a light stage of sleep, in order to avoid waking someone who is deeply asleep, which causes tiredness, even if the person has had adequate sleep. To turn off the sound or light, a button or handle on the clock is pressed; most clocks automatically turn off the alarm if left unattended long enough. A classic analog alarm clock has an extra hand or inset dial that is used to specify the time at which the alarm will ring. Alarm clocks are also used in mobile phones, watches, and computers. 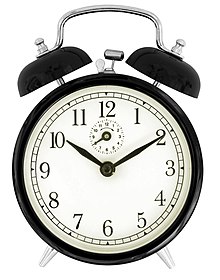 Many alarm clocks have radio receivers that can be set to start playing at specified times, and are known as clock radios. Some alarm clocks can set multiple alarms. A progressive alarm clock can have different alarms for different times (see next-generation alarms) and play music of the user’s choice. Most modern televisions, computers, mobile phones and digital watches have alarm functions that turn on or sound alerts at a specific time.

This is a feature allowing a mobile phone to act like a common alarm clock but with more flexibility.

Currently, all mobile phones offer this functionality with varying feature sets. For example, most devices allow you to set an unlimited number of alarms and set them to repeat on a daily or weekly basis. Some even allow a customizable snooze period and with the most advanced devices you can silence an alarm just by turning the device face down.

Using a favorite FM radio station as an alarm tone is also an option with some handsets.

Some phones require the device to be on for the alarm to work while others do not.